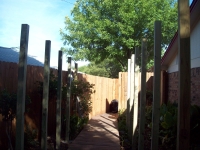 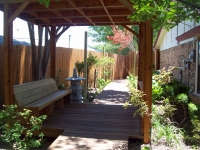 This Arbor Trellis was inspired by a simple design that I saw in a magazine.  The design was basically a two sided trellis as a walk through, however, I expanded on the idea and integrated it to fit my Wrap Around Deck.
I decided on a 20' span in order to coincide with the length of the deck.  I used 4"x4"x10' posts to compensate for the different ground levels of the yard. 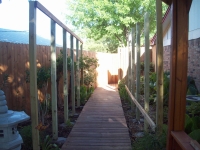 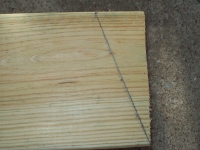 In order to make sure that the height was level, I used one of the 1"x4"x20' boards that I would be using for the top portion later on.  I experimented with various angles to decide what length of lumber I would be using on top inorder to minimize waste.  I decided on a 2" angle cut and 2"x6"x12' lumber cut in half.  Once the top portion was installed, I then adjusted the overlapping length. 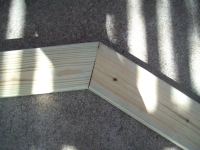 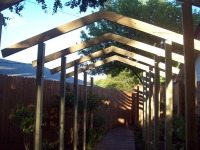 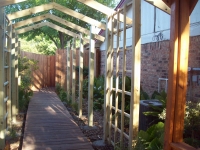 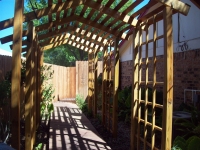 I then proceeded to build the trellis with 2"x2"x8' lumber.  The distance between the posts was measured at 4' apart.  That way, I could construct the trellis on every other opening.  In this manner, the walkway would not feel claustrophobic when walking through.  It would also allow for access to the plants for maintenance. 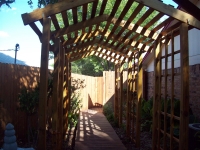 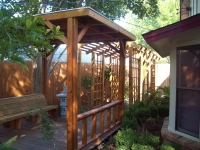 The boards on top were cedar and treated with a Transparent Redwood Stain prior to installing in order to minimize waste of the product since it is a bit expensive.  The cedar lumber only required one coat, however, the treated lumber needed two because of the tint that this type of lumber  comes with. 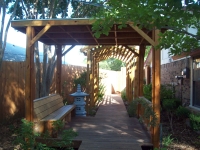 The final product turned out very well, blending in with the surrounding area.  It appeared as if the structure had been there all along.  I also planted at least six Clemetis Vines with five different color scheme of flowers.  These type of vines will grow up to twenty feet once established.  This was the first year of planting, and they are coming along very well for spring growth. Now that the weather has changed, we are able to spend more time outside enjoying the ideas that were envisioned.  As I do with all of my structures, I will be installing Rope Lighting to enhance the structure for evening use.